Blog - Latest News
You are here: Home1 / Article Archive2 / I was there3 / How to do the world’s worst intro flight 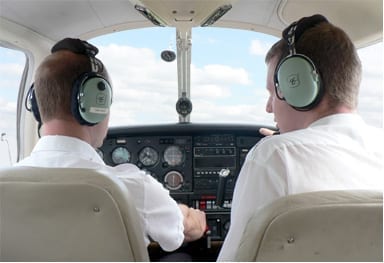 I took my first-ever light airplane ride on September 3, 1977, at Bellevue Airfield, in Washington State.

Bellevue was a non-towered, privately-owned airport, located off Interstate 90, in a burgeoning suburb east of Seattle. It sat just outside of the congested SeaTac International Airport terminal control airspace. It closed in 1983 and was turned into a business park.

A fun, but not exactly bustling, airport.

running down the west side. It had a smattering of hangars and small aviation businesses, plus a hodgepodge of aircraft tie-down areas. It was home to lots of cool planes and a great place to explore.

The north end of the runway ended short of a residential area, and not too far from a small neighborhood lake. The south end lay perpendicular to I-90, with a narrow frontage road barely separating the threshold of Runway 2 from the interstate’s westbound lanes.

I lived on a street that ran adjacent to the eastern border of the airport property. It was approximately 100 yards from my front door, through some woods, to the approach end of Runway 20. I’m an FAA brat: my father was an aeronautical engineer; he loved all things aviation and passed that DNA to me. Growing up there was like being in hog heaven for me.

But even though Bellevue Airport was an integral part of my daily life, I never once considered that I might actually learn to fly there one day. The random and sporadic aircraft accidents never concerned me… much.   I had done poorly in high school, was not much of a STEM wiz, and spent all my spare time and money working on cars. In fact, I had gone to college, dropped out (twice), and was working at a minimum wage job, while living back at home.

Then one day, I was driving by the airport when the song “Come Sail Away,” by the rock group Styx, came on the radio. I was compelled to pull into the parking lot.

Bellevue’s one small FBO sported a “Piper Flight Center” sign above the door, with a couple of relatively new Cherokees parked in front. I went inside and presented myself to the combination receptionist/ cashier/ scheduler/ Unicom radio operator, and told her I was interested in taking their $15 intro flight. She leaned past my shoulder to yell at someone behind me.

While I stood there, I noticed a radio on the counter, turned on and absolutely abuzz with different voices, saying different things, from obviously different locations (“Come in, Rangoon”)… how cool!

The very young CFI came bounding out of his phone-booth sized office, grasped my hand, shook it vigorously, commented on my firm grip (“…you’ll need a lighter touch on the controls”), and ushered me to a small table in the lobby. I remember telling him my name—but that’s about the extent of my part of the conversation. The rest of our time together was filled with a rapid-fire, non-stop monologue by the CFI, on everything from how great the weather was, to who actually flew first (Orville or Wilbur), to Bernoulli and Newton and what makes things fly, to how fun it was to master the mighty PA-28-140, to how cool the girls will think I am with a pilot’s license.

His discourse continued, even as we got to the counter, signed out the keys, and walked out to a plane parked just outside the door. I remember looking back at the receptionist as we went out the door and I swear she silently mouthed “Good luck…”

The instructor hopped up on the wing, still talking, opened the single, right-side door, flipped some switches on and off, and then jumped down from the wing.

He directed me to follow him as he did the preflight inspection. He proceeded to walk briskly around the airplane, still keeping up his-nonstop narrative. He named each part that he touched, briefly described its function, and what exactly he was checking for here at “ground speed zero.”

Although I understood very little of what he was saying, it did occur to me that I had seen other airplanes with at least TWO doors. “That’s odd,” I thought…

Anyway, when he was done massaging the airplane, he asked me if I had any last questions (or was it last requests?). Before I could respond verbally, he gestured toward the black, non-skid strip along the right wing root, so up I went, into the cabin.

I’ll preface the rest of the story by stating I am in no way, shape or form, claustrophobic or prone to motion sickness, but the idea that he was going to sit next to me and effectively block my escape had a very sobering effect on me as I struggled with the seat belt.

As I contemplated how difficult it would be for me to throw up, let alone physically escape, through the tiny hinged vent window near my left arm, he continued to yak about all things flying, while he eased himself down into the right seat, fussed with his seatbelt, and various knobs and switches.

As he strapped in and started the flurry of events needed to start the engine, I saw what was obviously a radio, with the numbers “122.8” displayed in the frequency select window. Just like in the office, as soon as he started the engine, I could hear the same chorus of voices, and cool-sounding airplane-speak, coming out through the single ceiling-mounted speaker.

Even though I was enthralled by the radio, I noticed he never once took the hand-held microphone out of its holder to speak into it. Surely, we get to talk on the radio too, I thought.

We only had to taxi a few feet from the parking spot to the runup area. He explained it was important to point the airplane down the runway – into the wind, in the same direction we’re taking off – to aid with engine cooling during the runup. But, first, the flight controls: “Left up/right down, right up/left down, stabilator free and moving, rudder full left/rudder full right, flight controls checked…” Man, could he talk.

As he did the engine runup, the mighty O-320 strained to pull us forward against the brakes; although he had to yell over the din of the engine, and the chatter on the radio, he persisted in explaining everything he was doing.

Finally, after checking the mags, carb heat, mixture, fuel selector, DG, lights, flaps and trim… he flew his hands around the instrument panel one last time and asked “Ready?” Which I now realize was a rhetorical question. Even if I wasn’t “ready,” there was no way he was going to let me escape at this point. He reached up and locked the upper door latch. I was trapped. Since we were parked only about 20 feet from the end of the runway, the actual taxi-for-takeoff took no time at all.

It’s not a lecture.

I remember him telling me to “follow him lightly on the controls.” As we pulled forward from our runup spot, directly onto the runway for takeoff, without stopping, I remember him explaining that the concept of “steering with your feet” might take some getting used to.

We made a sharp 90-degree left turn, followed by an immediate 90-right, and we were on the runway centerline. As he started explaining what might happen if the plane did not accelerate “normally” during the takeoff roll… he had to raise his voice noticeably to be heard over the excited voice on the radio.

It was now close to high noon, with the sun directly overhead. I remember a shadow coming over the wing on my side, and then immediately flash over the engine cowling. The belly of the airplane, which I later learned was a Cessna 172, was close enough I could see dirt and oil streaks running down the middle, and hear its engine over our own. The pilot made no attempt to go around, and it touched down, on centerline, maybe four plane-lengths in front of us; which means in all likelihood, he was already in the flare (albeit a bit high) when we pulled out in front of him.

The CFI just sat there staring down the runway – continuing to jabber about something: I don’t recall about what, but I do remember the voice on the radio sounding really agitated as the 172 rolled down the runway.

We could not see the entire runway length, because of a “hump” in the middle, so we sat there until the tail of the Cessna disappeared over the horizon, waited about another minute or so, then the CFI released the brakes and shoved the throttle forward…

I would have gotten out if I could have reached the door quicker.

I don’t remember much about my fully narrated, 15-minute loop around the local area. I do recall something about “There’s my high school,” and “That’s the park where Ted Bundy kidnapped his last victim.” I just wanted to get back on the ground and out of this one-door airplane.

We managed to make it back to the airport, landed, taxied back to parking, and shut down, all without incident.

After a very thorough post-flight inspection, to “make sure we brought all the big pieces back,” we went inside and stood at the combination receptionist/cashier/scheduler/Unicom radio operator’s counter. We accomplished the required paperwork, which included me handing him $15, plus tax. With that exchange complete, he stuck out his hand and enthusiastically inquired: “So, are you ready to start taking flying lessons?”

To which I responded, “Yes, but not here,” and walked out.

What it takes to be one sharp pilot, part three: coordination
Scroll to top