Blog - Latest News
You are here: Home1 / Article Archive2 / I was there3 / Borrowing from the bag of luck 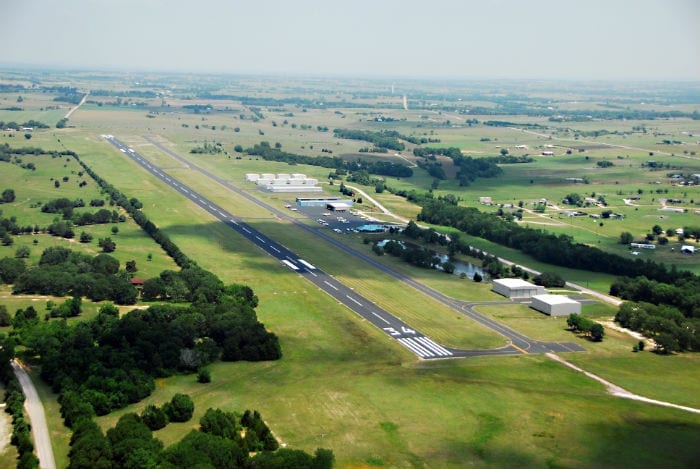 As I finished my private pilot training in 2006, my instructor told me that we start with a bag full of luck and an empty bag of experience. The trick is to fill the bag of experience before you empty the bag of luck. Less than three months later, the ink barely dry on my certificate, I had occasion to test that maxim.

By then I’d joined a local flight club and had access to a reasonably nice 1977 Cessna 172. A group of pilots from a local online forum were all going to head down for lunch at Brenham, Texas (11R) in early March 2007. I quickly secured the plane, invited my longstanding pilot mentor to join me, as well as a friend who was also completing her private pilot training at the time.

Brenham is a great place for a $100 hamburger – if you can get there.

I left from Grand Prairie Municipal (GPM) the morning of our flight with my student pilot friend in the right seat. We flew to Ennis (F41) to pick up my mentor and headed down towards Brenham (11R). The weather forecast was for fog at Brenham in the morning but we expected it to burn off in time for our group’s mass arrival.

On the way down my friend and I worked on VOR tracking to practice for her upcoming checkride. The clouds built as we flew and soon I was facing a shelf of clouds that I left me two options: climb high and potentially get stuck VFR on top, or descend and attempt to scud run towards Brenham. Add to this my mentor had been double-checking the time and was afraid we’d be late to the Brenham meet up. Neither of the first two options sounded good to me for many reasons, and my back seat passenger can learn to wait, so I flexed my newly minted PIC privileges and declared we’d set down somewhere this side of the cloud shelf and wait out the weather a bit

A quick scan of the sectional showed that Teague Municipal (68F) was just a few miles away. I diverted for the field and flew a straight in approach to a very quiet field. To this point in the flight, everything had been by the book and easy aeronautical decision making. Then things got complicated.

The approach was high; I was flying a 172 with three aboard when I was more used to two from my training days. Little differences in CG and handling had me carrying a little extra speed on approach. No problem I thought, it’s time for a full flap landing. This will bring us down and we’ll make the runway was my reasoning. That’s a nice theory, when it works, but this time the extra speed I carried led to a long float and quickly I found us running out of runway.

Nervous about being able to stop by the end I called a go around. I applied full power and pitched for climb as I nursed the flaps back up. Something was wrong though. We were struggling to climb and by now I’d already returned the flap lever all the way up. I glanced down the runway and while we were climbing, the trees looking intimidating off the end, the runway fast sliding away under my wheels. I glanced at airspeed, then VSI and it showed a 100 fpm climb. I was sure I could climb above the tree line at that rate by the time I got to them, but something was wrong – very wrong, and I no longer had enough runway to come to a stop now if I tried to set down again.

My brain raced through the options and I quickly checked everything on the panel: RPM normal, power on full, airspeed was low but correct for a climb, and we were climbing, but not like we should have been. From the back seat my mentor starts saying birds, Birds… BIRDS! in an ever more insistent manner as he’s focused on a group of turkey vultures circling just above the trees in a thermal at the end of the runway. My friend in the right seat quietly says, “flaps, flaps…” and I glanced out the side window to find they were still deployed. The flap control was up and they they should be full up, but they weren’t.

The switch is up but the flaps are down?

“Birds, BIRDS!” I heard from the back seat again. Firmly I called, “FLAPS” as I cycled the flap lever and they didn’t budge. Checking the VSI, it still showed 100 fpm. I scrambled through the breakers in the still new-to-me club 172 until I found the flap breaker, only to find it popped.

I reset the breaker, the flap motor whirred to life and the plane started to dump all the flaps at once. The 172 started to sink as the lift dumped with the flaps coming up too quickly. I caught the lever to stop them, arresting the sink, and slowly nursed them out again. The climb built as the drag went away. I breathed easier as we cleared the trees, made pattern altitude, flew a standard pattern and made a normal landing.

Once on the ground, we cycled the flaps several times and weren’t able to cause the breaker to pop again. Finding the FBO and the EAA clubhouse locked, there wasn’t much to do but sit on the railing and watch the weather as my mentor chafed at our delay. An hour later the cloud shelf broke up and we departed Teague for Brenham and still met our friends for a slightly later lunch. Our flight back to Ennis and Grand Prairie was completed without a reoccurrence of the problem.

On that very early flight in my piloting life, I borrowed quite heavily from the bag of luck my instructor had talked about in order to make a deposit in the bag of experience. I found that being the pilot in command can be very lonely in the left seat when things start to go wrong. You don’t make decisions by committee. From deciding to land at an alternate due to a slow to rise cloud base, to initiating a go around from a bad landing, to finding a successful solution to a flap malfunction. You never let yourself become a passenger; you have to stay the pilot in command.

There have been many more flights since that one in early 2007. Many more opportunities to add to that bag of experience with what I have hoped are modest withdrawals from the bag of luck. There’s a lot left to learn as we fly. So let’s get out there and keep ‘em flying. It’s how we learn. 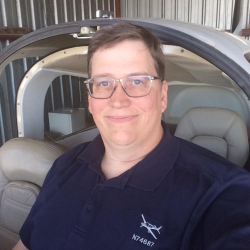 Mitcheal Veenstra
Mitcheal Veenstra began Private Pilot training just out of high school in 1984. However, life got in the way and it took until 2006 for him to complete. He previously held a membership in a 172 club, keeps up his tailwheel endorsement in a beautiful Citabria and enjoys a partnership in a 1974 Grumman Traveler that he flies not quite as much as he’d like most of the time. Holding an Advanced Ground Instructor certificate, Mitch has given groundschools to scouting groups as well as freelance instruction. With more than 390 hours Mitch has started working on his IFR/IGI ratings with an ultimate goal of becoming a CFI.

My first time as an aviation mentor – what do I do?

Surviving a mid-air
Scroll to top