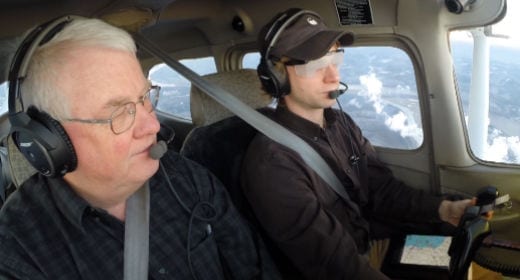 There are only two things pilots like more than flying: eating and talking. So it was no surprise when I recently found myself eating lunch and talking about airplanes with two fellow flyers. One of them was recounting the semi-regular proficiency exercise he had just completed, which consisted of some time in a tailwheel airplane (focus on stick and rudder) followed by some time in a simulator (focus on instrument scan). He was positively giddy: “That type of training is so good for you; I don’t know why every pilot doesn’t do it!”

My answer was simple: “Because pilots hate recurrent training.”

Admit it – you hate recurrent training.

This pilot is right, of course – regular training increases safety and confidence. It’s good for you, right up there with eating more vegetables and exercising daily. But while all pilots know these facts, very few of us practice what we preach. Instead, we treat proficiency flights like a trip to the dentist: something we do only as often as we’re required to, and even then we dread it. I’m guilty of it myself more than I would like to admit.

This reluctance isn’t just a sign of laziness. Most aviation enthusiasts will go to great lengths if something is rewarding – just think about how many pilots move heaven and earth to fly to Wisconsin in the summer. It’s also not about the cost, at least not primarily. A flight review isn’t exactly expensive (maybe $250 every two years), and a lot of proficiency work can be accomplished during normal flights if you plan ahead. Simulators, too, offer an easier and less expensive way than ever before to stay current.

The real reasons have a lot more to do with emotion, particularly fun and pride. Flying to Oshkosh may be a lot of work and cost a lot of money, but it’s also a lot of fun. Practicing crosswind landings or completing an instrument proficiency check just doesn’t measure up. Since most of us are in aviation for the fun, if it’s not fun why do it?

The pride part is even more powerful, because most pilots are successful people. Whether flying attracts this type of person or you become this type of person because you fly is debatable, but the airport isn’t exactly a haven for work-shy hippies. That’s not a bad thing, it just means that a session with a flight instructor is often a nerve-wracking affair. For an accomplished businessman or doctor to subject himself to judgment and possible embarrassment at the hands of a flight instructor (who could be 25 years younger) is no small task. If you’re used to excelling at life, it’s hard to admit it when you fall short.

Any solution to our proficiency paranoia, then, would need to address both the element of fun and concerns about “failure.” One obvious way to combat this mindset is to make it less exotic, and turn recurrent training into an ongoing process. Continue the dentist analogy for a moment: most adults don’t dread brushing their teeth every day, because it’s both familiar and not subject to someone else’s judgment. It’s just part of life.

We can approach flying in much the same way. If “recurrent” means a single event every two years, it’s much more likely to be stressful; it feels like a test. But if we view currency – or better yet, proficiency – as a normal part of every flight, it becomes a habit. A good goal is to deliberately do something on every flight to maintain your flying skills. It could be as simple as carefully tracking the centerline on the runway, or using short field technique on that next landing. The point is, on even the shortest and most relaxed flight, there is an opportunity to knock the rust off.

It can even be a bit of fun. Instead of doing the boring three takeoffs and landings routine to “get current,” make up a short cross country that accomplishes the same thing. Fly to a nearby airport for lunch, but practice an en route diversion along the way, do a no-flap landing when you get there and throw in some steep turns on the way home. Do it with a friend and add a little friendly competition if you like, or review your performance over a burger.

Some iPad apps and even a GoPro can make it easier for you to track proficiency.

It’s also worth remembering that you don’t have to hire a CFI in order to evaluate your flying skills, a mistake far too many of us make. There are plenty of ways to self-critique and avoid the pain of public embarrassment – if we’re willing to be honest with ourselves. This has always been true, but some new technology makes it easier than ever.

I’ve recently been using the CloudAhoy app, in conjunction with a Stratus 2 ADS-B receiver, to track my performance and I’ve found it to be very helpful. The Stratus includes an automatic flight data recorder, logging GPS position and aircraft attitude for every flight. Importing that track log into CloudAhoy allows me to play back the flight overlaid on charts or even in a 3D Google Earth environment. Did I track the localizer accurately? How were my holding patterns? Was my altitude control solid? It’s all easy to see in the app, and you can track your performance over time to see when you’re sharp and when you need more practice.

Another option, used to great effect by a colleague of mine, is to use a GoPro video camera. These are relatively inexpensive and easy to use, yet they record high quality video and audio. It’s a good way to play back your flight in the comfort of your home and see how you did – a VFR pilot might focus outside the airplane, an IFR pilot might focus on the instruments, and both can listen to ATC communications. There’s a lot to learn here, and you can do it all on your own.

Of course we all have to eventually schedule that flight review or instrument proficiency check. Like so many things in life, how we approach recurrent training determines what we get out of it. If we approach it as a chance to learn something new, we’re a lot more likely to have a positive experience than if we view it as a test (which it’s not – you can’t fail a flight review!). Besides, if we’ve been regularly working on proficiency this will just be a formality, and a chance to get another person’s perspective. Hopefully that other person isn’t just a random choice, either. Find an instructor that can be a resource and a mentor for you, someone you can talk to year-round.

I do an annual flight review in both of aircraft I fly most often (insurance companies long ago realized that the FAA currency minimums are insufficient). After flying the same equipment for a few years, this can get repetitive, so I decided make it into a challenge. My new goal is to write down five new things I learn from each year’s session. As a result, I’m much more engaged in the training, and I spend a lot more time probing certain topics instead of trying to rush through it. Is this a cheesy way to trick myself into paying attention? Maybe, but it works.

Overall, we have nothing to complain about when it comes to the legal requirements. In contrast to so many other FAA rules, the currency standards for private pilots are almost ridiculously light: get an hour of ground and an hour of flight instruction every two years, no testing required. That gives us wide latitude to make up our own proficiency plan, which is a good thing. But it’s incumbent upon us to do that, and not just pencil whip a flight review after 24 months.

It all comes down to attitude. Perhaps the most important difference between a professional and an amateur is whether you embrace continuous learning. Be a pro, even if you fly 40 hours a year.