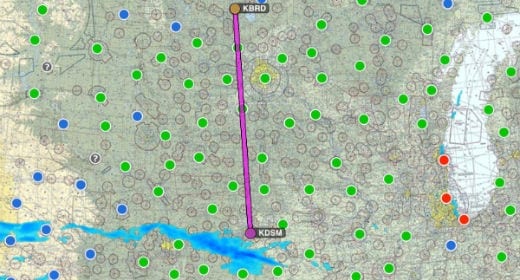 Today you’re not the one flying the trip – a friend who is a relatively low time pilot has called and asked for your advice. Your friend is returning from visiting family in Minnesota, and planning a flight from Brainerd Lakes Regional (BRD) to his home airport of Des Moines, Iowa (DSM). The flight will take just under two and a half hours in his 1977 Cessna 182, which has a good autopilot, Garmin 530W and XM Weather. He has 400 hours total time, but with no instrument rating this will have to be done VFR. That may be a problem, because the sky is solid overcast.

You pull out your iPad and review the weather below. Proposed departure is at 2100Z. What’s your advice for your friend – go or no go?

There is plenty of weather south of the route of flight, with some heavy snow in Missouri, but the first look doesn’t look too bad through Minnesota and Iowa.

The surface weather analysis shows that weather system to the south, and a weak low to the west.

The 12 and 24-hour forecast charts show that big system sliding east, but it shouldn’t directly impact the flight.

Next up is a look at the radar and satellite pictures. Radar shows that snow to the south, but nothing between Brainerd and Des Moines yet.

The visible satellite shows solid clouds all throughout the Upper Midwest.

The infrared satellite image suggests the clouds aren’t that thick, but it doesn’t matter much for your friend, since he’s VFR.

The first concern today is ceilings and visibility. There’s a small AIRMET for IFR conditions near your departure that needs more study, but nothing closer toward Des Moines.

PIREPs don’t shed much light on the low level weather.

In-flight icing is always a concern, so you look at the AIRMET for icing. It shows plenty of it to the south, from 4000 ft into the flight levels.

PIREPs back up the threat for icing, but all of them are for 4000 ft. and above. It looks like VFR below the clouds is ice-free.

Turbulence AIRMETs are all for high altitudes, suggesting a low level flight might not be too bumpy.

The key today is whether your friend can safely and comfortably stay below the clouds, since there are no holes in the overcast and plenty of ice up there. Is a flight at, say 2500 ft, possible? You look at the METARs and TAFs along the route.

The departure airport doesn’t look great. The ceiling is actually much better than forecast, but visibility is right on the edge.

At the destination, weather is good VFR, as all the clouds are high level.

You’ve reviewed the weather; now it’s time to share your advice. Weather is marginal at the departure airport, but it’s not bad at the destination. What do you tell your friend? Go or no go? Add a comment below.

Playing politics at 27,000 feet – a story from the South Pacific

Finishing what you start – even after an accident
Scroll to top