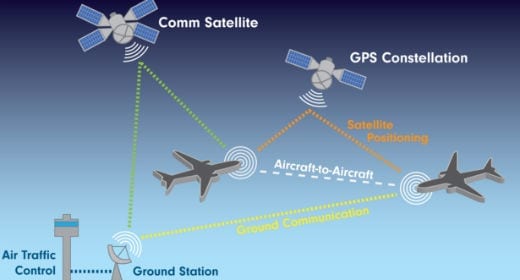 In the words of Richard Collins, it is “the most important airspace rulemaking proposal ever made: it will affect more pilots and carry a greater financial burden than any previous proposal.”

Mac McClellan argues that, “The FAA had a good idea when it planned transition… but is now screwing the whole thing up.”

ADS-B is complicated, but is there any good to it?

More concerns about the 2020 ADS-B mandate, you say? No. In this case, Collins was writing about the requirement to add Mode C transponders, in the May 1988 issue of Flying magazine. McClellan’s editorial, written three years later, was about the Mode S transponder proposal (which was eventually shelved).

Today, you could read a similar editorial in most aviation magazines, but of course the target is now ADS-B. The system may have been a good idea in principle, we read, but now it’s overdue, over budget and overly restrictive. As AOPA President Mark Baker recently wrote, it’s plagued by “technical glitches and hazards” and offers no clear benefit for pilots.

That means over the past 25 years, pilots have complained about three different transponder rules: Mode C, then Mode S and now ADS-B. Is the FAA really this incompetent, or do pilots just like to gripe? As usual, the answer is a little bit of both, but I say the ADS-B glass is half full.

Now before you reach for the pitchforks, let me assure you that I’m no Pollyanna (I didn’t say the glass was completely full!). The FAA’s handling of ADS-B, and their NextGen modernization program in general, has been absolutely dreadful. After 10 years and nearly $2 billion, the ADS-B ground station network is complete, but little else is. Necessary ATC upgrades are far behind schedule, and less than 10% of required airplanes have been upgraded to meet the mandate. One key reason is that the system is almost laughably complicated. Do you need ADS-B In or Out? 1090ES or 978 UAT? Want a WAAS GPS with that?

But while everyone loves to bash the FAA (including me), I think we’ve gotten a little carried away this time. It’s simply unfair to say that ADS-B is all bad and no good.

First, it’s worth remembering that not everyone will have to upgrade to ADS-B. If you fly a Cub off a grass strip to chase $100 hamburgers, you most likely won’t have to upgrade (airplanes certified without electrical systems are exempt). Likewise, if you don’t fly to busy airports (Class B, C or D airspace), your airplane never has to equip with ADS-B. These details have been public knowledge for years, but in my unscientific surveys shockingly few pilots know them.

Doomsday scenarios suggest thousands of airplanes will be parked on January 1, 2020, orphaned by an arbitrary FAA rule. The more likely scenario is a lot less dire: pilots who don’t equip with ADS-B will simply avoid busy airspace. Pilots have decades of experience at muddling through; that will come in handy once again.

A full traffic picture? Why is that a bad thing?

Another reason for optimism is that ADS-B actually offers some benefits. While the Mode C mandate did almost nothing for pilots (hence Collins’ outrage), ADS-B offers both uplinked weather and traffic. Those are two valuable services, and neither one requires a subscription.

Also, in contrast to the Mode S debacle, the ADS-B ground station network is actually in place–so pilots can and are taking advantage of these benefits right now. Tens of thousands of pilots are flying with portable ADS-B In receivers, which have lowered the cost of avionics and led to safer flights.

Of course there’s a catch, and in this case the catch is that pilots have to equip with ADS-B Out transponders in order to receive those valuable traffic reports. That costs money, but some perspective is in order: if someone told you 15 years ago you could have a full traffic display and a new transponder in your cockpit for $4,000, many would have jumped on it. After all, the other option was to pay $20,000+ for an active traffic system. I know at least five aircraft owners who have added ADS-B Out to their airplanes after flying with ADS-B In, because they got a taste of the system but wanted a better traffic display.

So while ADS-B was definitely created to help Air Traffic Control, we should admit that there’s plenty for pilots to like, too.

Like most things in aviation, the real debate about ADS-B comes down to cost. Traffic and weather are nice, but at what cost? While no one can argue that ADS-B Out transponders are cheap, they’re a lot less expensive than early Mode C transponders, which cost well over $10,000 (in 2014 dollars). Even that $4000 price may come down further when some recently-announced products hit the market in 2015. Not a slam dunk by any stretch, but we’re far ahead of both the Mode C and Mode S schedule.

Some associations have their hearts set on a portable ADS-B Out transponder as a way to lower cost. It’s a very interesting idea, but I see almost no chance of it becoming a reality. It would be akin to shooting an LPV approach in actual IFR conditions with a portable GPS–something the FAA would never allow (and they’re right). I have trouble seeing ATC separating a Boeing from a Cirrus based on a portable device sitting on the back seat.

In the end, I think pilots don’t like to be told what to do. We like to plan our avionics upgrades, not have the FAA do it for us. I get that. And ADS-B is needlessly complicated, summing up so much of what is wrong with the FAA. But this system is coming, whether we want it or not. I think we might all be a little happier if we stopped talking about “the mandate” and started talking about “the benefits.”

After all, pilots were quite willing to spend money on panel-mount GPS units when it became obvious that they had real benefits. Might we get there with ADS-B?

Full disclosure: my company sells ADS-B products, including developing the Stratus ADS-B receiver. However, the opinions in this article are mine alone–certainly informed by my experience with ADS-B products, but not written to sell them to you.