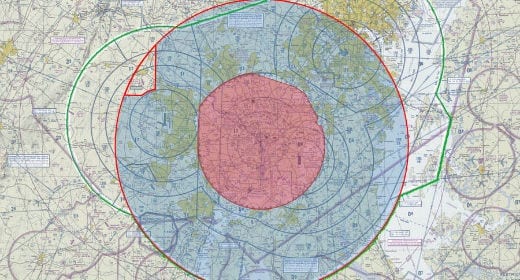 September 11 was different this year, at least for me. In 2006, five years after the terrorist attacks on New York and Washington, I remember thinking that it was too soon to really appreciate the changes these events had brought. In 2011, the ten year commemorations were so overwhelming that I just tuned out.

This year, far enough removed from the events to have perspective but close enough to still remember life before them, some things hit home. One was how old those news reports looked–while 2001 seems like just a few years ago, it was clearly another era when you watch the CNN broadcast of that day.

It was another era for pilots, too. We all know general aviation security changed that day, but when reflecting on the past 13 years it becomes obvious that the changes weren’t simply a one time shock. Year after year, we’ve added further layers of “security theater,” and I’m not sure any of us want to admit how bad it has become. Worse still, nobody is asking whether these measures work.

It’s worth reviewing some of the wasteful and ineffective programs we put up with. That’s not because we should forget what happened that day, but because bad security measures hurt everyone: they cost taxpayers lots of money, they discourage pilots from using their hard-earned certificates and they distract security organizations from doing real work. “Better safe than sorry” may be true, but none of the following items make us any safer:

Those “temporary” flight restrictions are 5 years old – but the FAA can’t guarantee it.

Temporary Flight Restrictions are simply a fact of life these days, but does anyone really believe they work? It’s obvious that a dedicated terrorist could get through a three mile radius TFR  in less than a minute–long before anyone could react. So why do we insist on advertising the location of important people? We’re essentially giving criminals and terrorists an itinerary for the President, Vice President and major sporting events.

Perhaps most outrageously, many temporary flight restrictions are anything but temporary–multiple TFRs have been in effect full time for over five years. These have become catch-all tools for organizations to restrict flights over their events, whether it’s Disney World or NFL football games, and they often have little to do with security. Anything that permanent should go through a full legislative process, with the ability for voters to weigh in.

In essence, TFRs have just become traps for pilots. They can be created for almost any reason, their times change at a moment’s notice and there is no oversight. The FAA can’t even get it right–their own TFR website admits that they do not have a complete list of TFRs. This begs the question: if the FAA doesn’t have that list, who does? It’s hard to play the game when nobody tells you the rules.

The Electronic Advance Passenger Information System (eAPIS) is a classic case of the security bureaucracy forcing general aviation to fit into their airline-centric system. Customs and Border Protection seems to think that since airlines have to file detailed flight plans and submit passenger manifests, private pilots should too. The idea that a Part 91 “manifest” might not be confirmed until just before departure must seem impossible to CBP, as does the idea that not all international flights have access to the internet.

Participation was initially voluntary, but we all know how that goes with government programs. Now participation is mandatory and the penalties are stiff for making a mistake. Notably, eAPIS is required for flights that leave the Untied States, not just arrivals. How long before we’re filing eAPIS forms for our $100 hamburger flight to the neighboring airport?

The frustrating part about eAPIS (other than the confusing and slow website) is that it does nothing to make the Customs process more efficient. Pilots still have to call the Customs facility they plan to use and schedule an arrival time, a chore that would seem to be easily accomplished with an online system like eAPIS. And of course there’s no evidence that eAPIS has caught a single act of terrorism–I guess criminals don’t like to fill out paperwork. Like all stupid rules, eAPIS is worse than ineffective: the bad guys ignore it and the good guys get hassled.

Is it a TFR, class B airspace or something else?

The Washington Special Flight Rules Area shows government inertia in action: first created as a quick reaction to September 11, this restricted airspace eventually hardened into a permanent rule. The result is a bizarre “airspace on top of airspace” arrangement, where pilots have to navigate a huge Class B airspace area and a quasi-permanent TFR. It’s so confusing that multiple organizations have created online training courses, and any pilot who wants to fly around the nation’s capital must complete it. Not a good sign.

But it’s not clear what the SFRA accomplishes that couldn’t be done with Class B airspace. After all, Class B airspace requires all traffic–VFR or IFR–to be in communication with ATC and to be cleared into the airspace. There’s also the 30nm Mode C veil around Class B.

Like most of these security policies, the SFRA seems to be borne out of a philosophy of “shoot first, ask questions later.” Does it do any good? Only for the F-16 squadrons that get to stay current on intercept procedures, as they chase the occasional lost Cessna away from the White House.

Talk about a knee jerk reaction. When it came to light that some of the September 11 hijackers had trained in the US, the doors to American training institutions slammed shut. What was once the world’s premier destination for aviation training has become openly hostile towards foreign students.

Here’s another case where we’ve learned exactly the wrong lesson from history. Terrorists did make it into the US for airline training, but that seems to have been due to lax enforcement and not insufficient paperwork. In addition, at least a few of them were caught by the training organizations they worked with. Only because of terrible intelligence coordination, arrogance and some bad luck were most of the hijackers able to elude the FBI. No one wins by sending flight students to far-off countries where we can’t watch them. It’s bad for our economy, it’s bad for safety and it’s not even a smart security strategy.

Just when you thought it couldn’t get much worse, reports began to emerge about a number of shocking incidents last year. Pilots flying completely innocuous flights were suddenly met on the ramp by armed law enforcement personnel and often detained for hours, with no explanation for why the pilot was being questioned. Many of these flights were flown VFR, with no flight following, which raised the question of how these airplanes were being tracked in the first place.

These stops seem to have died down lately after intense pressure from AOPA and Congress, but the technology and the infrastructure is still in place for tracking VFR flights across the country. It’s not alarmist to think this will be used for something else in the future, after the initial controversy dies down.

What can be done?

It’s human nature to react to traumatic events, so it’s not surprising that many of these ideas popped up after September 11. But it’s also human nature to quickly adjust to new circumstances, which means we don’t question the new reality after awhile. But we need to.

Some in the TSA argue that, since there have been no major terrorist attacks since September 11, their approach to security must be working. But this is a typical argument from ignorance. Just because there haven’t been any attacks on sports stadiums does not mean the stadium TFR program has been successful. Even if they did “work,” there’s no consideration given to the cost involved, whether financial or in freedom.

Like so many issues with government, the problem is easy to define but hard to solve. No one cares if these programs work because no one in power ever has to answer that question. Multiple agencies are given broad discretion to “keep us safe,” with little oversight and no requirement to take a balanced approach. Given that mandate, it’s hardly surprising that onerous new security programs keep popping up. They’re just doing their jobs.

The only solution is to get some serious political pressure put on the TSA, CBP and FAA. But what politician is going to take a stand for this? Voting against security (even the theatrical kind) is like voting against baseball or apple pie. And standing up for private pilots and airplane owners? That’s like defending Wall Street CEOs.

It’s time to take a new approach. The goal shouldn’t be to carve out some special protections for private pilots–that’s short-sighted and politically impossible. The goal should be to attack a shockingly wasteful culture of homeland security, where organizations spend vast amounts of time and money on programs with no discernible benefit. A little oversight and a lot of budget cuts would go a long way.

Critically, it’s not enough to just slow down the pace of new restrictions; at some point, we have to start rolling back these ineffective policies. That would be good for aviation, no doubt. But I think the stakes are higher than that.

Fog makes a flight to remember

Redemption – convincing my wife to fly again
Scroll to top