Blog - Latest News
You are here: Home1 / Article Archive2 / John's blog3 / Remote ATC towers – coming to an airport near you? 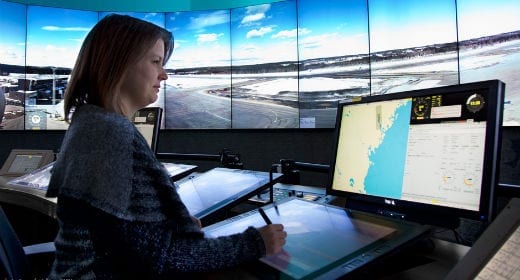 With those simple words, the friendly voice from the control tower declares that the runway is all yours. The implicit agreement between you and the controller is that you have an extra set of eyes at the airport, watching the traffic flow and ensuring your airplane doesn’t hit another one. Like a race car driver talking to his spotter, flying into towered airports is a team sport.

But what if there’s not actually a tower at the airport? And what if that friendly voice isn’t watching the runway with his own two eyes?

This question is no longer hypothetical. The concept of remote towers, once the stuff of research papers and futurists, is now a reality–and it might be coming to the US sooner than you think.

Remote towers aren’t as crazy as they sound.

Rapid advances in technology, especially high definition cameras and fast internet connections, make a remote tower fairly easy to imagine. In a typical installation, multiple HD cameras and a microphone are placed at the airport to be the controller’s eyes and ears. A full meteorological sensor package is also installed for weather reporting.

These sensors are then connected (via high speed data link) to a centralized control room–often hundreds of miles away. The controller monitors and communicates with traffic just like today, but the view out the “window” is really a wall of computer screens.

Sweden, and Saab in particular, is the leader in this technology. As an example, the Ornskoldsvik Airport in northern Sweden was recently approved to operate solely by remote tower. Multiple other tests sites have been running, and they have proven that this system can work–and quite well.

Just because a remote tower is possible doesn’t mean it’s a good idea. Why the new attention? The reason is exactly what you might expect: money. The continuous cycle of fiscal negotiations and FAA budget cuts–particularly the sequestration fight of 2013–forced many in the FAA to review every expense. It was only natural that control towers, which cost roughly $1.5 million to build and another $500,000 per year to operate, would get some scrutiny. With over 500 locations in the US, it’s pretty easy to find some savings by trimming even a few dozen.

But the idea of completely closing towers or ending the contract tower program met with pretty stiff resistance from the aviation industry and many in Congress. That sent the FAA looking for an alternative solution, just at the time when technology had matured enough to make the remote tower concept affordable.

Perhaps surprisingly, even the National Air Traffic Controllers Association (NATCA) is supportive of this idea–or at least they think it’s worth exploring. The union is probably making the calculation that a remote tower is better than no tower for its members, and that may be the only choice on offer.

What should we as pilots think about this trend? Are remote towers just the latest effort to dehumanize aviation? Are the bean counters ruining our world? That’s the natural reaction to this type of story, but I think that’s overkill.

First, no one is talking about eliminating all control towers, so don’t expect to see a remote tower at O’Hare anytime soon. While Sweden’s testing has been encouraging, it’s worth remembering that their aviation system is quite different from the US. For example, the remote tower at Ornskoldsvik can operate with enviable predictability, since 100% of the traffic at the airport is scheduled. There are no VFR pilots out for a $100 hamburger at these Swedish airports.

But even considering these limitations, there are plenty of plausible uses for a remote tower. For one, there are dozens (if not hundreds) of airports in the US with control towers of dubious necessity. 149 of these were slated for closure during sequestration, and even the most ardent GA supporter would have to admit that some of these probably don’t need to exist. A remote tower could be a good middle ground between a fully-staffed tower and a completely non-towered airport.

There are other uses that make even more sense. For example, at seasonal airports like the ones found in ski country, a remote tower could be a cost effective way to offer service only during the three months when it’s needed. And it is often needed: a tower offers major time savings for IFR airplanes in the winter. When traffic drops down again, the tower simply goes away. The same is true for temporary towers during large sporting events–could there eventually be a mobile tower sensor truck that could roll in, sans controllers?

Even at some busier airports, like LAX, large parts of the ramp are not visible from the tower due to obstructions (and the sheer size of the airport). A blended approach, where the traditional tower includes displays from remote cameras, could be a major safety enhancement by allowing controllers to see all ground traffic.

Pessimists will naturally worry about the relentless drive for cost-cutting. Will one controller end up working four airports and potentially making a fatal mistake? That setup probably would not work for the freewheeling style of the US, and it’s unlikely that NATCA would go for that arrangement anyway. But even if each controller is limited to working one airport at a time, remote ATC could allow ten “towers” to be housed in a single building. That alone would lead to cost savings on the facilities.

Much like Flight Service evolved from in-person offices to a few centralized locations, ATC may evolve into a service that’s less focused on the physical location of the person delivering it. It may not be perfect, but it’s not necessarily unsafe or unreasonable in an age of austerity. I, for one, remain open-minded about this trend.

Just don’t try to sell me on “drone towers.” You’ve got to draw the line somewhere.

The descent: enjoying the ride down