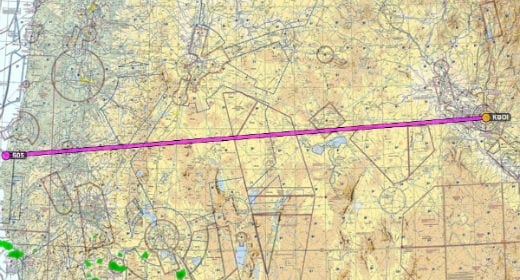 You’ve been looking forward to this trip for months, as you and some buddies are headed to beautiful Bandon, Oregon for a long weekend of golf–five tee times in three days. Better yet, you get to fly there in your Piper Malibu. While “ordinary” folks have to fly into Portland and drive four hours or make multiple connections on the airlines, you can fly directly to sleepy Bandon (S05) from your home in Boise, Idaho (BOI) in just over two hours. This is what general aviation is all about.

You have over 2500 hours total time, with 500 of those in the Malibu. You are instrument current and accustomed to flying in the Pacific Northwest. The only concern is the weather. Bandon State Airport is strictly VFR, with no approaches, and coastal Oregon is famous for two things when it comes to weather: overcast skies and gusty winds. Can you make the flight legally? How about safely?

Your proposed departure time is 1700Z. Read the briefing below, then tell us if you would fly the trip.

There is no major weather system in your way and the radar is clear on your route from Idaho to the coast of Oregon:

The surface analysis shows no organized fronts in your area:

In addition, there are no SIGMETs, AIRMETs or pilot reports that affect your flight.

Bandon State does not have any weather reporting, and there are very few airports close by, so it’s a bit of a guessing game. North Bend Airport, 21 miles north, is the only option. It’s reporting marginal VFR conditions, with strong winds out of the south (typical for coastal Oregon):

The forecast shows more of the same, with some lower ceilings moving in as the day goes on:

The only other airport within 50 miles is Roseburg (RBG), which is much further inland, but its ASOS is out of service so you don’t know what the weather is there.

Legally, you must file an alternate for this flight, since Bandon State has no instrument approaches (see FAR 91.169). Practically speaking, it’s also a good idea, since conditions are marginal.

Unfortunately, the forecast weather is below alternate minimums at OTH:

The next closest alternate is Roseburg, but without the ASOS it is not approved as an alternate:

So it’s off to Eugene (EUG), which is over 80 miles away. Finally, you’ve found an airport that can qualify as a legal alternate:

Finding a legal alternate is only part of the challenge, though. What will you actually fly?

The TAF at OTH isn’t too encouraging, considering your arrival time of 1915Z. But you know from experience that OTH is right on the water, so it often has lower weather than S05 (which is inland by a few miles). The current METAR at OTH looks better, but you really don’t know if that trend will hold. The temptation is to “go take a look,” and descend as low as you can to see if you break out over Bandon. Unfortunately, the lowest ATC will vector you over S05 is about 4000 ft.–probably too high to get under the broken layer.

You could gamble on a VFR descent. It’s often the case in this part of the country that the skies are clear over the ocean, with a layer of clouds just on shore. So you could overfly S05, descend over the water, then turn back towards the shore (under the clouds) and land at Bandon.

For Plan C, you could go shoot an approach at OTH, then scud run down to S05 after breaking out. But the only approaches at OTH are to runway 4, so you’d be flying them with a blistering tailwind. And if the TAF is correct, it would be quite a low scud run.

Actually landing at OTH doesn’t look great either, since the forecast ceiling is below the circling minimums for the ILS to runway 4 (and you don’t like landing downwind):

Going all the way to Eugene would be a fairly significant hassle, and would remove most of the convenience of flying yourself. But it is the only sure thing right now (other than the airlines).

8 engines, coming at us