Blog - Latest News
You are here: Home1 / Article Archive2 / I was there3 / Over the river and the wood 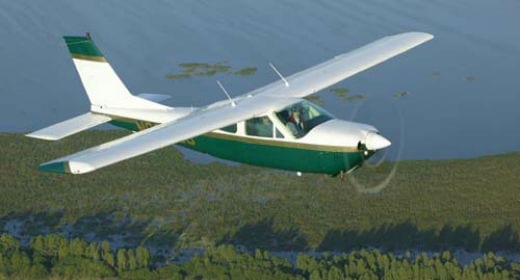 We often think of airplanes as a way to make long trips shorter, or make them possible at all, but sometimes we forget that the trip doesn’t have to be very far at all to make it worthwhile to fly, or that it can conquer more than one kind of distance. Here’s the story of one case in point.

When my wife Christine and I got married, her mother was invited to the ceremony but chose not to attend. The lady did not approve of me and that disapproval persisted for a solid decade. On the few social occasions where we forced together we managed to present a civil face to the world, but quite honestly, she was sure I was an ax murderer who some dark night, was going to chop her daughter and grandson to bits as they slept in their beds.

Barbara Powers, her daughter Colleen Powers, and two of her great-grandchildren. The birthday boy in the story is on the right.

Obviously there was no basis for this delusion. Not only were Chris and I quite happily married, I don’t even own an ax–never have. But no matter how many years went by her opinion of me never changed.

Most of Chris’ family lives in the southern part of New Jersey. Before we met, Chris had made the drive down there from Massachusetts more times than she could count. Let me tell you even if everything goes exactly right and there are no jam-ups on the Mass. Pike, GW Bridge or Jersey Turnpike, that trip takes five hours. Add in some traffic and it can go to six or even seven long, long hours on the road. Any of you who have been caught in that kind of automotive vortex know just what I mean.

Then in the summer of 1997, I started flying again after a very long break. At first we took a rented 172 on $100 hamburger runs around New England but then one summer we needed to get Chris’ son home from an extended visit with his relatives in New Jersey. I suggested we fly down to pick him up since a quick look at Google Earth showed most of my wife’s relatives live within spitting distance of either South Jersey Regional or Camden County airports. In a Skyhawk, even dodging around the Tri-cities Class B, it is only a couple hours of flying time from central Mass. We need to get Mike? Gee, the weather’s good, the airplane is free, why don’t we fly down to get him?

This was the first of many flights to the area. My new nieces, nephew and sister in-law were impressed, but the kids actually were more excited to find out (when they came to visit us one summer) that I drove a pickup. As for Mike, he fell asleep on the way back to Massachusetts.

A couple years went by and I bought into a Cessna Cardinal based at Fitchburg, Massachusetts. My wife and I very quickly became attached to this plane. I’m still a partner today, but more on that another time.

The Cardinal is roomier than a 172, faster, has better visibility, and is a whole lot easier to get in and out of thanks to those big doors that open so wide. Trips to New Jersey became a regular thing, especially once the nieces started having children of their own.

One day Chris and I were talking about a trip down for the first birthday of the newest baby and I, prince of a fellow that I am, said to Chris “We really ought to invite your mother to come along. She’ll say no, but we really should invite her.” Once Chris got over the shock of me even suggesting the idea, she agreed we should extend the invitation and called her mother.

To say we were shocked is putting it mildly. Chris was panicked. How were we going to do this? What if she raised a ruckus in the air? What if after what if went through her mind. Her son, Mike, even got in on the deal. He called his grandmother and told her not to cause any trouble and do what I told her. The stage was set.

Barbara, my mother in-law, lives in Northampton, Massachusetts. It’s a pretty town north of Springfield, famous for Smith College and as the home of Calvin Coolidge and not much else. It does have a nice little airport, only a couple miles from Barbara’s front door. We gave her a call just before leaving Fitchburg, told here we’d be there in about a half hour, and she met us at the airport.

We got loaded up, those big doors making it easy for her to get in and I gave her the required briefing on seat belts and all that good stuff. I got my spare headset on her and plugged into the intercom jacks and off we went.

It was a perfect day for the trip. Clear and smooth and she got a good view of Manhattan even though we were stayed out of the Class B. In about 1.5 hours she was on the ground, surrounded by little kids and having the time of her life. All the kids thought the airplane was really neat, too.

A future pilot at the controls of the author’s Cardinal.

After four or five hours, it was time to load up and head home. The flight back was just as nice, a tad longer due to some headwind, but in about two hours we were back on the ground at Northampton to drop off Barbara and half an hour after that Chris and I were back in Fitchburg with the airplane tucked into the hangar. Mission successfully completed.

The really funny stuff started coming in over the next few days from various relations. For one thing, Barbara said she’d thought I was brand-new pilot, not a returning aviator. Uh huh. She was impressed with my professional manner in dealing with ATC and my feather-soft landings. In addition, it was just amazing how different a person I was, how much I’d changed. Yeah, right.

Anyway, from that day on I was her private airline, connecting her with her other child, grandchildren and great-grandchildren. I became the greatest thing since canned beer and sliced bread. She tells all her friends about our trips, including the one all the way down to Raleigh to see Mike at grad school. She gets incensed at the government’s attempts to restrict GA post 9/11 and writes letters to her congressman, telling him she’s seen lots of grandmothers at little airports but no movie stars, and to leave GA alone.

So once more the airplane has conquered separations. Not only are we closer in time to the Jersey contingent, the airplane has also made a big change in personal relationships. The great-grandkids don’t understand why their friends’ relatives don’t show up in an airplane when they come to visit, and they know ours is the one with the bird on the tail. On top of that, I get to be the cool uncle, a role I never anticipated. It’s actually kind of fun.

POSTSCRIPT: This story has been kept “on the spike,” as they say in the publishing business, for years. Somehow my wife and I knew that, if it came out before her mother’s death, she’d somehow find out about it and not probably not approve. Well, that is no longer an issue. Barbara Ann Powers died on December 19, 2013 after a brief illness preceded by a long decline. During her last two years she lived in an elder living facility in New Jersey near the majority of her family. She is survived by two daughters, four grandchildren, and six great-grandchildren.

There will be other flights to New Jersey in the Cardinal, but not to visit her. In the tradition of pilots, I wish her clear skies and tailwinds as she departs into the West.

A flight to remember – Angel Flight for Sarah