Flying clubs have been around since the beginning of aviation, but they are receiving increased attention lately. The Aircraft Owners and Pilots Association (AOPA) has spent a lot of time investigating the flying club model, and it seems clear that, when done properly, clubs can reduce the cost and increase the fun of learning to fly. In this article, Adam Smith, Senior Vice President of AOPA’s Center to Advance the Pilot Community, shares his perspective.

I recently spent a few enjoyable evenings reading copies of the old magazine “Popular Aviation” from the late 1920s and 1930s. Back then, the publication was making a big nationwide push to promote flying clubs, and the old articles made me wonder if any of those early clubs had survived to the present day.

A few minutes with Google told me that indeed they had. The Reading Aero Club in Pennsylvania began in 1929 when a group of 14 men each contributed an equal amount to purchase two Curtiss-Wright Juniors. The club was formally incorporated in 1932 and is going strong today, still flying two airplanes. Members pay $90 per hour (wet) to fly either a 1999 Cessna 172 Skyhawk SP or a 1999 Piper Archer III.

$90 per hour is a pretty good hourly rate for a modern, well-maintained, IFR equipped airplane, and this speaks to the basic value proposition of a flying club. Providing affordable access to aircraft is an idea that works just as well today as it did in 1929.  In fact you could say the case for flying clubs is even more persuasive today. The more the cost of aviation rises, the more it makes sense to share big ticket items like aircraft purchase, hangar rent, insurance and annual maintenance across a group of people.

And online scheduling tools have helped address the biggest perceived downside to a flying club, that of being unable to fly the airplane when you want to.  I used the phrase “perceived downside,” by the way, because AOPA’s research showed that flying club members don’t see scheduling as a major problem. There are 8,760 hours in a year and the average private pilot flies for considerably less than 1% of that time. That creates a lot of opportunity for sharing.

While cost efficiencies are important to club members, don’t underestimate the value of the social factors too. When flying becomes a solitary activity, pilots tend to get dispirited and stop flying. But where there are social bonds, friendship, community and a sense of mission and purpose, they will stick around for a whole lifetime in aviation.

Flying clubs are a wonderful hotbed of social activity at a local level. Back to the Reading Aero Club as an example, their annual program includes a fly-in that collects donations for the local food bank, a World War II weekend, “Christmas in the Air” where local kids get a free airplane ride, and something called the “South Pacific fly-in Clam Bake” which sounds both intriguing and mouthwatering at the same time! The club’s members also fly in support of medical relief, veterans, and animal rescue organizations. This all paints an admirable picture, one that’s good for aviation in so many different ways. And remember, this is just a single club out of 650 in the USA.

We reckon the combined membership of flying clubs is about 38,000 people. But our research also uncovered a fascinating piece of information, that a further 51,000 active pilots used to be members of a flying club, but are no longer.

What happened? Did these people have a bad experience? Surely not, because satisfaction rates for club members are incredibly high, more than 96% positive.

No, what we’re seeing here is that flying clubs are a key gateway into aviation. For starters, a lot of people literally learn to fly through a flying club (about 70% of clubs offer primary instruction). But clubs also play an important role in getting pilots comfortable with aircraft ownership. To a newbie, it can be a daunting prospect to think about insurance, maintenance, and all the myriad things involved in owning their own aircraft. But give someone a few years in a club environment, and confidence grows, often along with the bank balance required to purchase an airplane.

This is exactly what happened to me. My first eight flying years were spent in clubs on both sides of the Atlantic, and then I finally bought an airplane of my own. Getting to know our new AOPA president Mark Baker, I was interested to learn that he followed a similar path. Although both of us now fall in the category of “former flying club member” we deeply appreciate the role that clubs played in our journey through aviation.

A good example of this trend is the West Valley Flying Club in California, one of the biggest clubs in the country with an impressive fleet of over 40 airplanes. Formed in 1972, they have counted almost 10,000 pilots graduating through their ranks, 250 pilots per year from just one flying club.

AOPA is not saying that flying clubs are the single answer to all the issues we face in general aviation. But hopefully you’ll agree that, as part of a healthy ecosystem, they are a worthwhile place to spend some of the organization’s time and resources.

Last year we launched the AOPA Flying Clubs Initiative and are fundamentally trying to do two things with it. First, we want to do everything we can to help the flying clubs that already exist. We’ve been promoting clubs in the media, and built the Flying Club Finder as a marketing tool to help people find a club in their local area. We started a website, newsletter, Facebook Group and monthly webinar series to share knowledge and best practices among club leaders. We are staffing a helpdesk, advocating for flying clubs on a local and national basis, and working to improve key areas like financing and insurance. The reaction to all this has been very encouraging and we’re very pleased to have had almost 450 clubs join the new AOPA Flying Club Network.

Our second priority is to help new flying clubs get started. While it’s great to have an existing base of 650 flying clubs, that actually means over 4,500 public use airports in the country don’t have a club yet. Our goal is to grow to 1,000 clubs by 2017, which means we need to get 350 new ones started. Can it be done? Well the interest and demand is certainly there. We’ve heard from hundreds of people that are interested in starting a flying club. But actually getting a club off the ground does take a fair bit of perseverance. So far we have recorded 14 new flying clubs this year that have actually launched, and the Flying Club Finder lists a further 133 clubs that are in the process of formation. AOPA will help as much as we can in this area.

One of the clubs that got off the ground in 2013 is the Swamp Creek Flyers in Arlington, Washington. Seven employees of Dynon Avionics got together to build their dream airplane, a four-seat Glasair Sportsman. It was reminiscent of a flying club founded in 1927 at Clemson University (South Carolina) by seven students who scrounged lumber from the school’s wood shop, and built a single-seat parasol airplane together. Today, that very same club is still operating with a Cessna 152 and Cessna 172 that can be flown for $80 and $100 an hour respectively. I believe it to be the oldest flying club in the United States.

There is no happier moment here at AOPA headquarters than when we receive word that a new club has got underway. We have a big gong that is rung in celebration and, believe me, it can be heard throughout the building!

This is partly for fun, but we’re also making a serious point.  When a new flying club is born, the positive benefits can last for decades. Here’s to hundreds more of them. 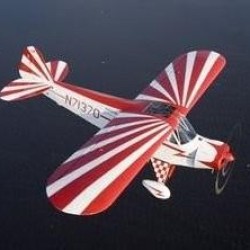 Adam Smith
Born and raised in northern England, Adam obtained degrees in modern history and museology from the University of Leeds, England and the University of St. Andrews, Scotland. Prior to relocating to the USA he managed the Scottish National Museum of Flight, located on a historic airfield near Edinburgh.While there, he learned to fly in a World War II Piper L-4. Adam worked for the Experimental Aircraft Association in Oshkosh from 2001 until 2012 where he oversaw the operation of the EAA AirVenture Museum, aircraft operations, youth education programs, membership programs, Chapters and publications.He also organized the program of features and attractions at the annual AirVenture fly-in. He recently joined AOPA as senior vice president of the Center to Advance the Pilot Community.The Center has been created to stop the slow, steady decline in the number of certificated pilots in the United States and seek ways to stimulate growth. Adam currently owns a Cessna 180 and a clipped-wing J-3 Cub, and is building a replica of a World War I Sopwith Pup using original plans.

A customer-centric approach to pilot training