Blog - Latest News
You are here: Home1 / Article Archive2 / Technique3 / LP approaches – coming soon to a GPS near you 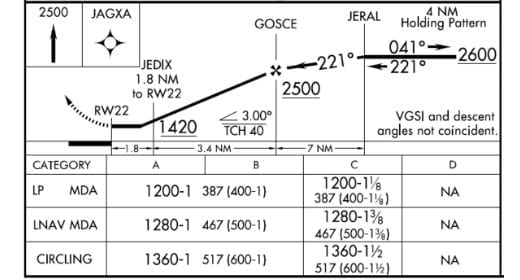 Remember LP approaches? Last year we shed some light on these obscure but increasingly common instrument approaches, which are part LPV and part LNAV. At the time, this was mostly an academic conversation–nobody could actually fly an LP approach. But that’s about to change.

A whopping 80 foot reduction in minimums for an LP approach vs. LNAV, but at what cost?

As a quick review, LP approaches are basically the WAAS GPS equivalent of traditional localizer approaches–precise lateral navigation, but no glideslope. They are being set up at a number of airports where a full LPV approach simply isn’t possible, usually due to infrastructure or terrain issues. There are now 412 LP approaches in the FAA’s inventory, far less than the 3,000+ LPV approaches, but still a decent number.

To fly an LP approach, you need to have a WAAS GPS, like a Garmin GTN 750/650. If you have an older GNS 430W/530W, you just need to have software version 3.3 or higher. The problem has been that, even with the right equipment, the LP approaches were not in the Jeppesen NavData database that drives these modern GPSs. So you couldn’t fly them if you wanted to.

Recently, though, word has trickled out that LP approaches are finally hitting the Jeppesen database–perhaps as soon as the February 7 update. That means those 412 approaches will finally be flyable.

So what? Isn’t the addition of a bunch of new WAAS approaches a good thing? Not necessarily.

The problem is that LP approaches do not show an advisory glideslope. Remember that LNAV approaches (like LPs, a non-precision approach) create a mathematical glideslope that can be displayed on your GPS and HSI–annunciated as LNAV+V on most GPSs. This isn’t a real ILS-style glideslope, just a way to fly steady descents from the final approach fix (FAF) to the missed approach point (MAP). Nonetheless, this is a major help for pilots, eliminating the “dive and drive” method of flying an approach.

Why would such a helpful tool be removed from a WAAS approach? The FAA was worried about pilots confusing LP and LPV approaches, and flying an LP advisory glideslope right down to the runway as if it were an LPV glideslope. So early guidance from the agency was that LP approaches could not have any type of glideslope indication. GPS manufacturers duly complied with this directive.

That beloved +V advisory glideslope is gone with an LP approach.

The benefit you get in exchange for this loss of glideslope display–lower approach minimums–is pretty insignificant. Take the state of Ohio: there are 16 total LP approaches in the state, with a median benefit of only 20 feet in lower MDAs. That’s impossible to even notice on the altimeter. The greatest reduction in MDA is only 140 feet and there are two cases where it’s 0 (the LP MDA is exactly the same as it was for an LNAV-only approach). In those cases, you’ll see no improvement in minimums but you’ll lose your advisory glideslope. That’s a bad trade.

Remember that you can’t choose which approach to fly–LP approaches are only set up when there is no LPV approach, so this isn’t just a fail-down mode for LPV. If you choose the RNAV Runway 22 approach at I69, for example, your GPS will fly the LP approach whether you want to or not. There’s no avoiding them with fancy button pushing.

The only good news is that the FAA seems to have recognized its error, and is now allowing avionics manufacturers to display an advisory glideslope on LP approaches. Advisory Circular 90-107 now says, “The avionics integration may include advisory vertical guidance during an LP approach.” Garmin says they are aware of this change, and are considering adding the LP + V feature. But it will probably be quite a while before this upgrade comes to your cockpit.

So for now, spend an extra minute briefing your next flight and look to see if there’s an LP approach. If so, don’t plan on seeing a glideslope. You’ll want to know that long before you hit activate and realize your trusty old LNAV approach has been replaced.

Go or No Go: game time
Scroll to top