Blog - Latest News
You are here: Home1 / Article Archive2 / I was there3 / A mother overcomes her rusty pilot fears to share the joy of flying

I earned my private pilot’s license when I was 29 at Wings Field (N67, now LOM). I then flew for fun and talked a few friends into coming along sometimes. A favorite destination was lunch at the airport diner in Ocean City, NJ (26N), and my friend Carmen was a willing passenger more than once. My reputation at my home field was that I was a good, careful, responsible pilot. I was proud of that—I was one of the few women flying there at the time.

I went ahead to earn my instrument and ultimately my commercial ratings. I flew on vacation in Kansas, Florida, and Montana, meeting flight instructors in each location who taught me some fun nuggets like mountain search and rescue techniques. I flew over PHL more times than I can count, looking down on the city buildings and watching the big planes descend below me to the runway. I loved my time in the air. 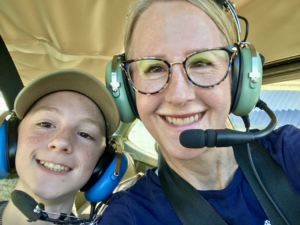 Becoming a mother changes a lot—including for pilots.

But after having my son, I found I feared flying. I was afraid to leave him without a mother. I would think about flying once in a while as I focused on working and raising him. I was busy, for sure, but I was also afraid. I accepted that bad things might happen when I flew before he was born. I was fatalistic that even the best pilots sometimes experience circumstances beyond their control. In the years after he was born, though, things changed. We moved to South Carolina, I didn’t have a known home field anymore, and it just seemed so hard to get back into flying. Most of all, I had some serious self doubts.

When he was 10, I said I wanted to fly again. I had actually kept up my third class medical the whole time. Even though I said to myself I wanted to fly, I still didn’t do anything about it. When he was 12, I got more serious and looked up nearby airports and flight schools. The one closest to me had a flying club, but I didn’t know if I wanted to sign up for that commitment. While I was once again at the ME’s office, he mentioned that the next closest airport was popular with his pilot patients because they had a lot of rental planes, so I decided that was the place to go. I signed up for Rod Machado’s online course as a refresher and did that in between work meetings, so I felt pretty good about regulations, airspace, and general ground information.

I called the flight school at Monroe Executive (EQY) and talked to the manager. She was a reassuring woman with a lot of flight experience herself, and she connected me with a flight instructor she felt would be a good fit. In March 2021, I finally got out to the airport. We did some ground school, and my knowledge was acceptable. In early April, I climbed back into a 172. I took two flight lessons that month, and then weather and life grounded me until November.

If I am being honest, I’ll admit that I had some second thoughts. I was so rusty, and that was disappointing to me. Landings were harder than I remembered—I did not remember having this much trouble landing in the past! GPS had emerged just as I stopped flying, so that was a new tool to me. It all seemed so overwhelming, and my confidence took a big hit.

In November, I found time again to go flying. On my second lesson in November, we did the skyline tour of Charlotte. It reminded me why I liked to fly—the amazing view you can’t get any other way. My ability to set up a stabilized approach came back quickly, and my manipulation of the controls was good. It started to feel a little better.

But then we did a night lesson. I always loved night flight because it was smoother, clearer, and there was typically less traffic to worry about. I was looking forward to it. We took off and flew into the nearby practice area to get more familiar with using the GPS to navigate. I was able to find the airport and entered the pattern. After turning final, I was lined up on approach when my instructor said, “Are you lined up with the runway or the taxiway?” With horror, I realized I was lined up to land on the taxiway, so perfectly lit with the blue lights. I quickly shifted to the left, now lined up with the runway. I had forgotten that the blue lights are the taxiway, not the runway!

While everything else started to fall into place, my landings were still a struggle. I searched for advice on how to improve and welcomed criticism from my instructor on my performance. I didn’t want to be an okay pilot—I wanted to be a good pilot. I wanted to grab center line and touch down softly again.

Then a series of planes being down for service impacted my flying time. My flight instructor told me he got a job with the airlines and would be leaving in mid-June. I second-guessed myself again. Maybe this was a sign that it was not to be. I wondered if I had to say “I used to be a pilot” rather than “I am a pilot.” 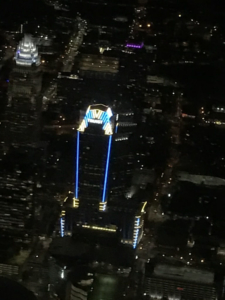 The skyline tour at night is always worth flying.

It was now almost 15 months since I sat down with my instructor for ground school. My instructor said he would sign me off when I said I was ready. My landings were safe even if not ideal. I decided I was going to finish this long flight review. I focused on landing and navigation with GPS, my two struggles. I discovered some helpful sites for improving my landings and used their tips.

Finally, things came together. We did a night flight over Charlotte, with my son in the back taking pictures. It was a perfect night, and the pictures he took are incredible. The fun part of flying was back.

In June, my flight instructor signed me off and a few days later, he left for his new job. I decided to try out all the planes at the school so that I’d have some options, and so I have flown with a new instructor for that. She is an impressive pilot and teacher, and she reminds me of another thing I love about flying—the camaraderie with other pilots.

I have also flown alone. The first time alone was like my first solo all over again. I was very careful on preflight, taking it slow. In my first circuit in the pattern, I talked out loud with every action, set up a stabilized approach, and landed smoothly. It was the culmination of a year and a half of work, delays, frustrations, and doubts. I felt the clouds lifting from me.

My son announced that he wants to learn to fly. In a couple years, I’ll let him do so. For now, he can sit beside me, and we’ll have some adventures like I used to before fear grounded me. We’ll go for lunch 50 miles away once in a while, fly along the coast, and do the skyline tour of the city again. He’ll get to see his mom as a competent pilot—how many kids can say their mom can fly a plane? Everything it took to get back in that left seat was worth it. Stacy Wiegman
Stacy Wiegman is a pharmacist in South Carolina with over 300 hours of flight time, mostly in Cessna Skyhawks. She holds a private pilot license—instrument and commercial ratings. Her favorite flight experience was flying in Montana at Glacier Park International Airport (FCA). She grew up with pilot parents who never thought she wanted to fly. She hopes her son with be the third generation of pilots in the family.

Passing the torch from father to son

Are “impossible turns” worth all the attention?
Scroll to top