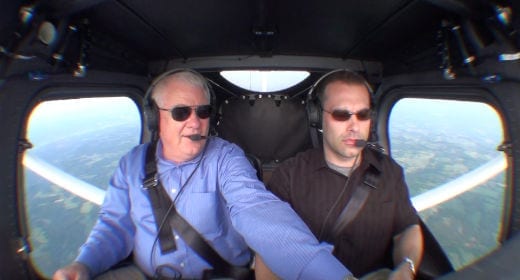 Better and worse than we admit

Like many pilots, I love flying Young Eagles. It’s a chance to get in the air, which is always a good thing, but it’s also a chance to fly with a purpose. That keeps me coming back for more, in ways even the best $100 hamburger can’t.

How do you answer a Young Eagle when she asks, “what’s it like to learn to fly?”

Beyond the joy of giving back, I really enjoy meeting the kids and talking to them about their perceptions and dreams of flying. Usually I learn as much from the questions the kids ask as they do from my answers. One of the most common ones is, naturally, “What’s it like to learn to fly?”

The first two or three times I got this question, I recited the industry boilerplate: “Oh, it’s thrilling, fun and life-changing. Go for it!” My message was unrelentingly positive—after all, we are trying to encourage Young Eagles to pursue a life in aviation.

But recently I’ve changed my answer. It started with a very curious and well-informed 15-year old wouldn’t accept my stock answer. She wanted to know details. How long did it take? Did you ever get discouraged? What was the hardest part?

After about 5 minutes, I could tell this impressive young woman was a real candidate for a career in aviation, so I quit the pep talk and gave her the truth: “Bad news and good news. Learning to fly is challenging and occasionally frustrating, there is no instant gratification, and more than once I considered quitting.”

I could see a frown start to appear on her face, so I closed with the good news: “But, it was absolutely worth it and I’m not being dramatic when I say earning a pilot’s license changed my life.”

Our conversation brought back a lot of memories about my own flight training. It was some 20 years ago, long enough to gain perspective, but recent enough to remember some moments quite vividly. Like many Air Facts readers, I suspect, I learned to fly in high school, spending my weekends at the airport. Even as a spoiled 16-year old kid, I understood how unique the journey was, but it certainly wasn’t all roses.

In addition to the usual mix of nervousness and anticipation, I remember feeling the flight school’s 172 was just plain worn out. To a kid in the mid-90s, faded chocolate brown paint and ragged vinyl seats were like something out of a time capsule. When my instructor started talking about a carburetor, all I could think of was antique cars—were they really on an airplane? And no air conditioning? Is that legal?

Overall, my lessons were fun, but there was nothing glamorous about sweating through 1.1 hours of slow flight and stalls in the summer heat. And there was so much to learn, from weather to regulations to engines. It felt an awful lot like work.

The timeline was also a tough match for a high school kid. With a busy schedule of school and sports (and fickle Ohio weather), it took nearly two years for me to earn my license. That’s an eternity for a teenager.

So after hitting one of those inevitable plateaus in training (will I ever be able to land this thing?!), I quietly wondered if it was really worth it. Maybe flying isn’t something normal people should do. But as a driven kid whose identity was increasingly wrapped up in aviation, I decided to push on.

I’m eternally grateful that I did.

My first solo was an event to remember, for sure, but it wasn’t my wow moment. That happened on my first cross-country flight with a passenger, after my checkride. Freedom is a word we use a lot to describe the benefits of aviation, and that is part of it. But so is responsibility, and I found that even more alluring. Somewhere on that first “revenue flight,” it hit me that I was the only person responsible for bringing this 130 mph machine and my passenger back to the ground safely. No do-overs, no restarting the game—this was serious business. For a 17-year old, that’s both frightening and, yes, thrilling.

It’s worth it, but let’s be honest about what it takes to succeed.

That’s how flying can change who you are and how you approach life. Just like a good steak satisfies you long after a candy bar wears off, my pilot’s license delivered accomplishment and enjoyment that no video game could ever match. The act of taking off itself wasn’t thrilling, but the power and responsibility that came with being Pilot In Command was. It forces you to grow up, to be independent, to focus on results instead of petty everyday concerns. It’s boot camp, without the PT.

Thinking about my flight training and the dreams of this motivated Young Eagle also made me think about how we advertise our “product” of learning to fly.

As a community, pilots do a pretty good job of getting kids interested in flying. Ask any 8-year-old boy about airplanes and his face will light up—no tablet or social network can change that. What we struggle with oftentimes is acting upon that spark and finishing the process.

In this regard, I think we do ourselves a great disservice when we tell prospective pilots that learning to fly is all fun and excitement. It’s not, and we know it’s not. In spite of what some overconfident pilots suggest, you do not have to be a superhero to earn a pilot’s license, but it certainly isn’t easy or fast.

This is nothing to be ashamed of! Flying is rewarding precisely because it’s such a challenge—one of the last big challenges we can take on in a virtual world.

Truthfully, flying is probably less thrilling than ever for a young person. In a world of HDTV and Playstation, taking flight can seem pedestrian (I know, kids today…). So if a young person takes a first lesson and isn’t overcome by excitement, it’s easy for him to feel disappointed—as if something is wrong with him.

This same problem of unrealistic expectations often afflicts new parents, too. Everyone is told that kids are “bundles of joy,” and we all see movies about new mothers instantly bonding with their newborn, knowing that “this is what they were meant to do.” As any parent knows, this is usually baloney. Kids are exhausting, frustrating and sometimes downright annoying. But, just like flying, they are life-changing, immensely rewarding and completely worth it. We do parents no favors by misleading them.

Don’t get me wrong: we must keep encouraging the next generation of pilots. It’s something about which I’m truly passionate. But let’s do it honestly and send them into the air with their eyes wide open. In the end, we actually undersell aviation if we pretend it’s just a flight simulator or an extreme sport.

So what’s it like to learn to fly? It definitely wasn’t what I thought it would be like—not even close. It was much, much better.